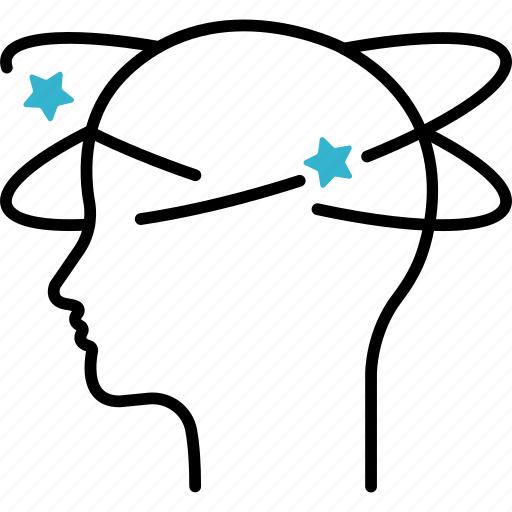 BPPV is a condition characterized by episodes of vertigo exacerbated by changes in head position such as going to lie down in bed, rolling over in bed, or looking up or down. The episodes typically last for seconds to minutes and are better with keeping the head still in neutral position. The term “loose crystals” is used frequently to describe the calcium carbonate crystals or otoliths that have broken loose from an area of the inner ear called the utricle or saccule. These crystals are attached to the utricle and help us sense gravity in a linear fashion (i.e. moving forward or backwards).The crystals attached to the saccule help us sense gravity and linear acceleration predominantly in a vertical direction.Head trauma, a current or old inner ear infection, autoimmune/inflammatory disorders, migraine, or other inner ear disorders such as Meniere’s disease may cause the crystals to break off from the utricle or saccule. If the crystals migrate into the semicircular canals it can cause positional related vertigo or “gravity-dependent” vertigo. There are three strategically placed hair cell bundles that sit at the end of three semicircular canals (three in each ear, six total). Imagine a snow globe representing your head position and then turn it upside down. Even though your head is still, the “loose crystals” are still moving and stimulating the cupula by driving endolymphatic fluid flow, thus telling your brain that you are rotating in space. This visual-vestibular mismatch causes the vertigo sensation and may also lead to nausea and vomiting.

The patient will normally have two equally functioning vestibular apparati, one for each ear, that are bathed in endolymphatic fluid.The fluid generally has the same consistency and components as cerebrospinal fluid, with the exception of slightly different potassium levels found in endolymph.This system is innervated by the eighth cranial nerve (vestibulocochlear), particularly the vestibular division of that nerve.

The vestibule pertains to the two otolith organs called the utricle and the saccule.These organs respond to linear accelerations. Each of these organs has a structure called the macula, which is a single patch of sensory hair cells, on to which the otoliths attach by a “jelly” like viscous matrix.In the utricle, the macula lies in a horizontal plane, whereas in the saccule, the macula lies in a vertical plane.Thus, the utricle senses gravity predominantly in a linear horizontal direction, while the saccule distinguishes predominantly vertical linear movements.The organs do this because the otoliths (also known as otoconia “crystals”) are calcium carbonate structures that are heavier than their surroundings and deflect the kinocilium hair cells of the maculae toward the vector of linear acceleration (or gravity). Deflecting the kinocilium repolarizes the hair cells and results in sensory information transmitting to the brain stem where balance and eye movement reflexes are generated.

The semicircular canals refer to the structures of three looping canals found in each ear.The canals in each ear sit at approximately right orthogonal angles to each other and detect rotational head movements (angular accelerations). The canals include bilateral horizontal (lateral), anterior, and posterior semicircular canals. When the head moves, there is a corresponding movement of fluid (endolymph) within the canals that push on a structure called the cupula, found in each canal.The cupula is an accessory structure that rides on top of the crista ampullaris and deflects the kinocilium of the hair cells when endolymph passes over it. Similarly, a deflected kinocilium depolarizes hair cells in the crista and sends sensory information to the brainstem to generate compensatory balance and eye movements. The lateral canals correspond to yaw like rotation of the head. The anterior and posterior canals correspond to head movements in the pitch and roll axes, similar to those described with orientation of airplane movements.The canals work in tandem to provide a complementary signal for the brain.For example, with left horizontal canal excitation with head rotation to the left, there must also be right horizontal canal inhibition.The anterior and posterior canals are set up in a cross fashion. This means that when an anterior canal is excited, the contralateral (on the opposite side) posterior canal is inhibited. Pathology of the balance portion of the inner ear often presents in a variety of forms and can include vertigo, disequilibrium, and imbalance.

Nystagmus is a rhythmic oscillation of the eyes, which may be physiological or pathological. Normally, the eye remains in the position of primary forward gaze, even when a person is not deliberately focusing on any visual target ahead, because of balanced input from the left and right vestibular systems, which are finely tuned to respond to any movement of the head relative to the body.

If a person turns his/her head to the side without making any deliberate attempt to fixate on any visual target, the eyes will remain centered in a neutral position of primary gaze as a result of vestibulo-ocular reflex (VOR; a reflex mediated via the vestibular system), which ensures that the eyes respond promptly to any movement of the head relative to the body in order to keep the eyes centered in the socket. If that person spins around in a circle (like a ballerina), theoretically the eyes should follow the head at the same speed as the person swivels around. However, if that person spins too fast, vertigo will ensue if the movement of the eyes cannot keep up with the speed of rotational movement of the head (due to the slow latency of response of the vestibulo-ocular reflex) => the vertigo is due to the disparity in eye movements relative to head movements.

Physiological nystagmus will occur if the conscious brain of the spinning person deliberately interferes with the smooth movement of the eyes during rotation of the body, by deliberately fixating on different visual targets during the spin. If the eyes fixate on a visual target during a rotational spin, the eyes will obviously be lagging behind the movement of the body as it continues to rotate, and it would appear to an observer that the eyes are moving smoothly in the opposite direction of the body. Ballerinas use this technique to prevent getting dizzy during rapid pirouettes. When the ballerina reaches a certain point in her rotational spin (when the eyes are displaced to the near-extreme limits of its excursion in the socket), she re-fixates her eyes on another visual target, and the voluntary saccade causes a rapid eye movement to the intended re-fixation position. In other words, the pirouetting ballerina has self-induced physiological nystagmus - a rhythmic oscillation of the eyes, with alternating fast phases and slow phases, and the fast phase occurs as a result of the conscious brain’s attempt to re-fixate a visual target.

A pathological nystagmus occurs when the eyes drift slowly from their intended position as a result of an abnormality of one of the slow eye movement controlling systems or the neuro-regulatory “gaze-holding” system controlling eccentric gaze(looking side to side, up or down, and obliquely).In most cases, the drift is corrected by a rapid eye movement - an automatic phenomenon of a conscious brain that brings the eye back to its intended position. Nystagmus is rarely the main clinical sign, and many patients with pathological nystagmus present with symptoms that vary depending on the underlying disease (e.g. BPPV, acute peripheral vestibulopathy, acute cerebellar syndrome, etc.). 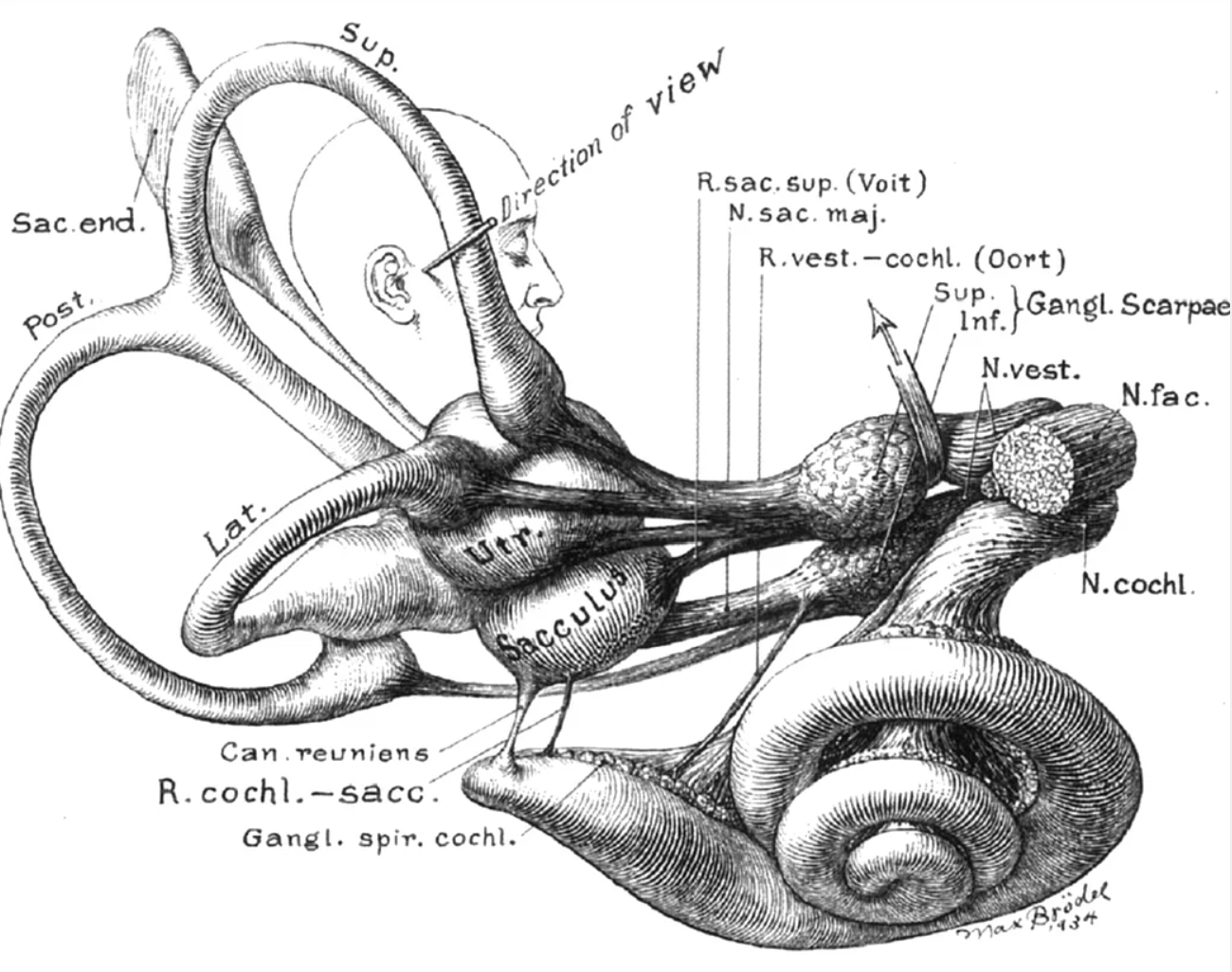 Anatomy/Physiology of the Inner Ear

The anatomy of the inner ear is composed of both the cochlea (the sensory organ required for hearing) and the vestibular apparatus (which provides sensation for orientation and balance).Both of these systems, considered the labyrinth of the inner ear, are encased in the temporal bone.

The vestibular apparatus is the structure in the inner ear that contributes to the sensation of equilibrium, the coordination of head positioning, and the vestibulo-ocular reflexes.The system consists of the vestibule and the semicircular canals.