What is Meniere’s Disease (MD)?

Meniere’s Disease (also called Idiopathic Endolymphatic Hydrops)  is a condition characterized by episodes of vertigo associated with fluctuating hearing loss, aural fullness, and tinnitus (ringing in the ears) often described as a harsh roaring machinery-like sound.  The vertigo often builds over minutes to hours and can be associated with nausea and vomiting.  During these attacks, you may find yourself unable to perform daily activities and may find benefit from lying down until the attacks subside.  MD is caused by a disruption of the fluid (endolymph) balance of the inner ear.  An overproduction of endolymph, or an obstruction of outflow, increases the pressure in the vestibule and cochlea, your balance and hearing centers respectively, and is called endolymphatic hydrops.  This swelling of the inner ear damages tiny sensory hairs, resulting in the typical symptoms of MD.  Risk factors for MD include genetic and vascular abnormalities, infections, metabolic factors, allergies, and autoimmune disorders.1  However, in the vast majority of cases the underlying cause remains unknown.  The condition most commonly affects a single ear, but can become bilateral with disease progression.

How is Meniere’s Disease Diagnosed?

The diagnosis of MD is largely clinical, based on history and audiometry findings (hearing tests).  Serial audiograms over time are crucial in tracking the type, degree and variation of hearing loss, providing useful information on disease progression.  The clinician may also look for abnormal eye movements called nystagmus, which are recorded in our office with infrared video oculography during vertigo attacks. This relies upon the reflex pathway from the hair cells in the inner ear and the muscles around the eyes, which can cause nystagmus during an acute attack.  The information from this study can also help to rule out other causes of vertigo such as benign paroxysmal positional vertigo.  In addition, you may require vestibular tests, blood work, and imaging including MRI and CT scans to rule out other potential causes of vertigo and hearing loss.

This audiogram depicts normal hearing function in both the right and left ear and all frequencies. 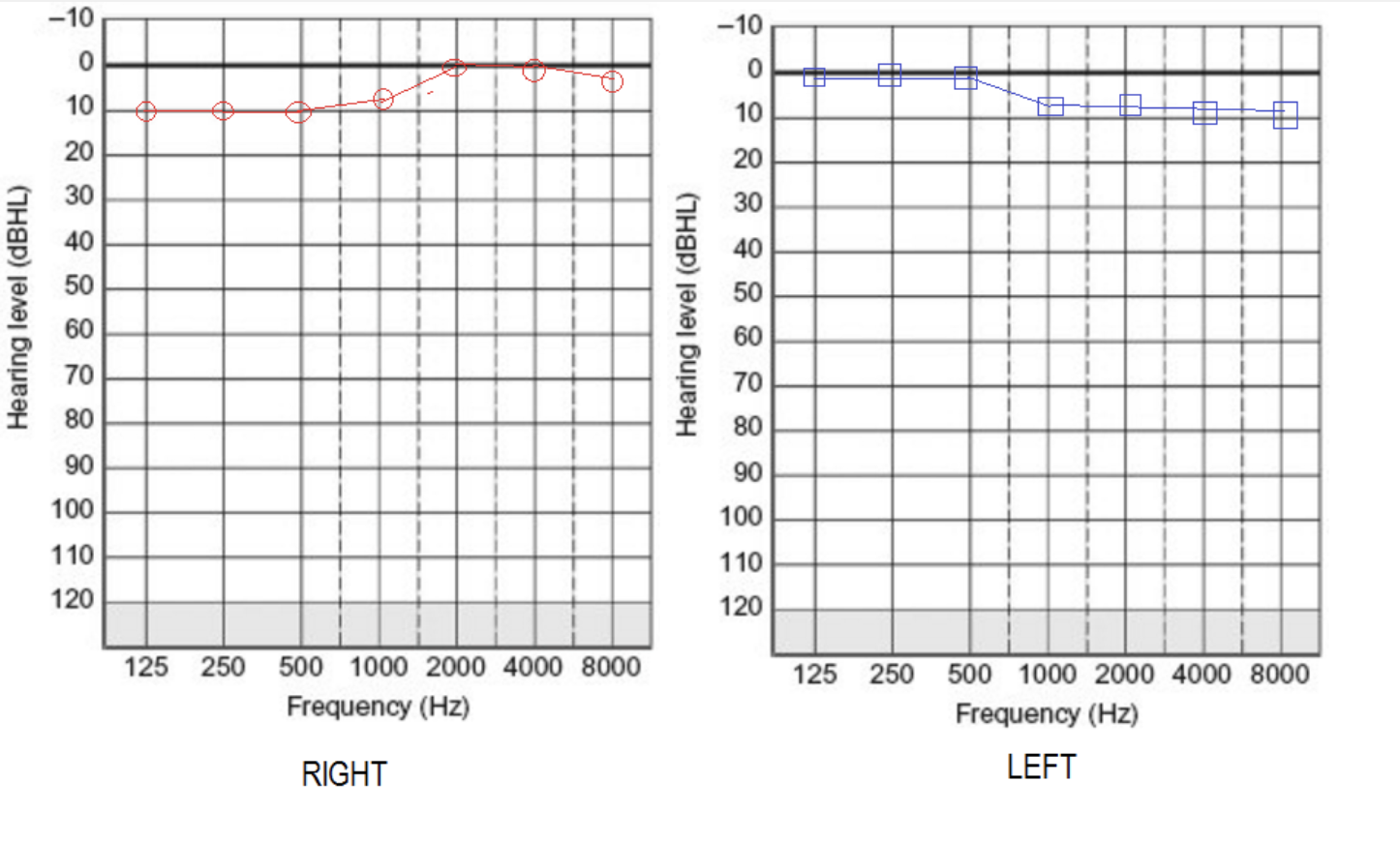 This is audiogram from a patient's suffering from a Meniere's attack on the left ear. During the Meniere's episode, low frequency hearing will be affected and the patient may also reports symptoms of tinnitus or aural fullness. An audiogram taken after an episode may show improvement in hearing function, however over time the patient's hearing would be expected to decline. 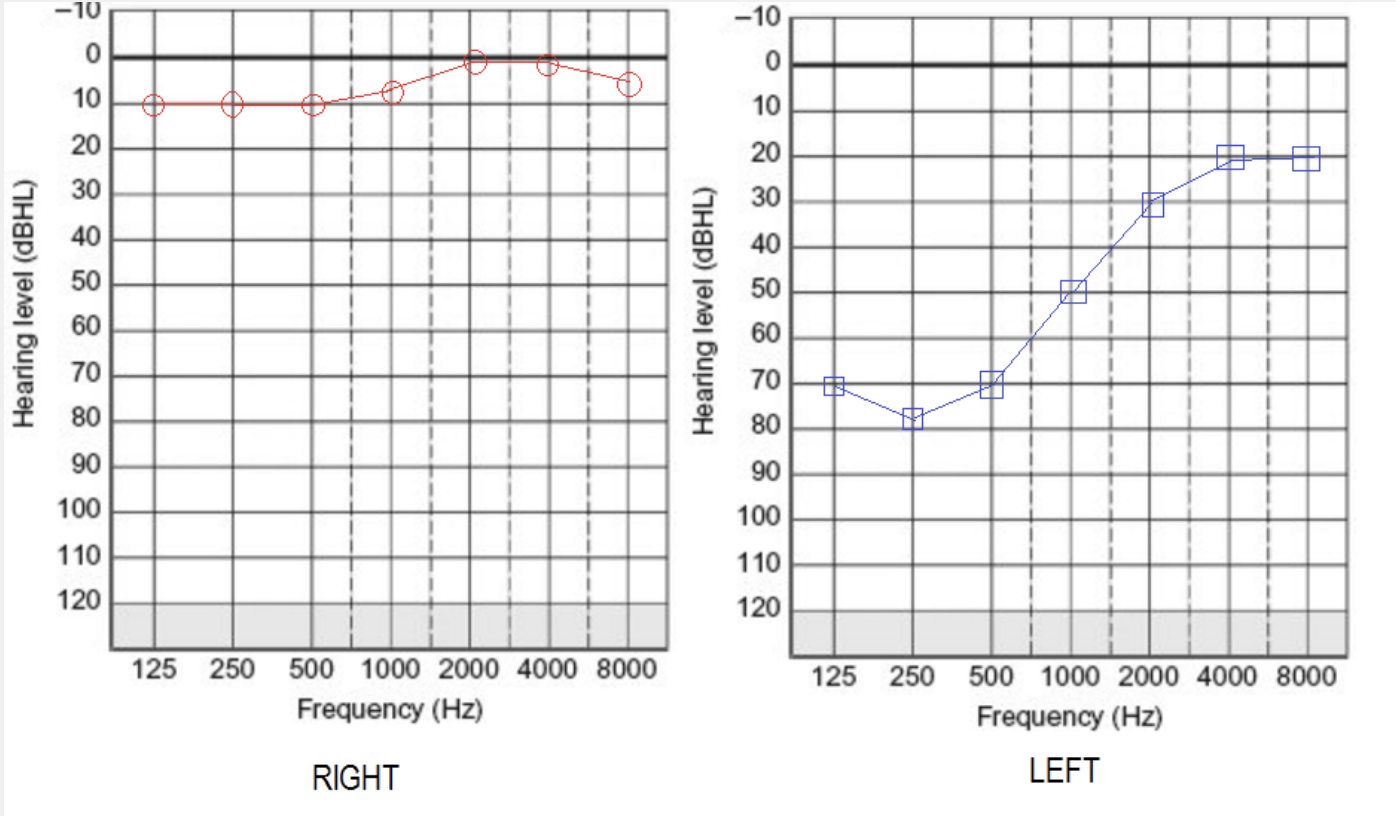 In the late stages of Meniere's disease, the affected ear will likely have permanent sensorineural hearing loss due to repetitive damage. 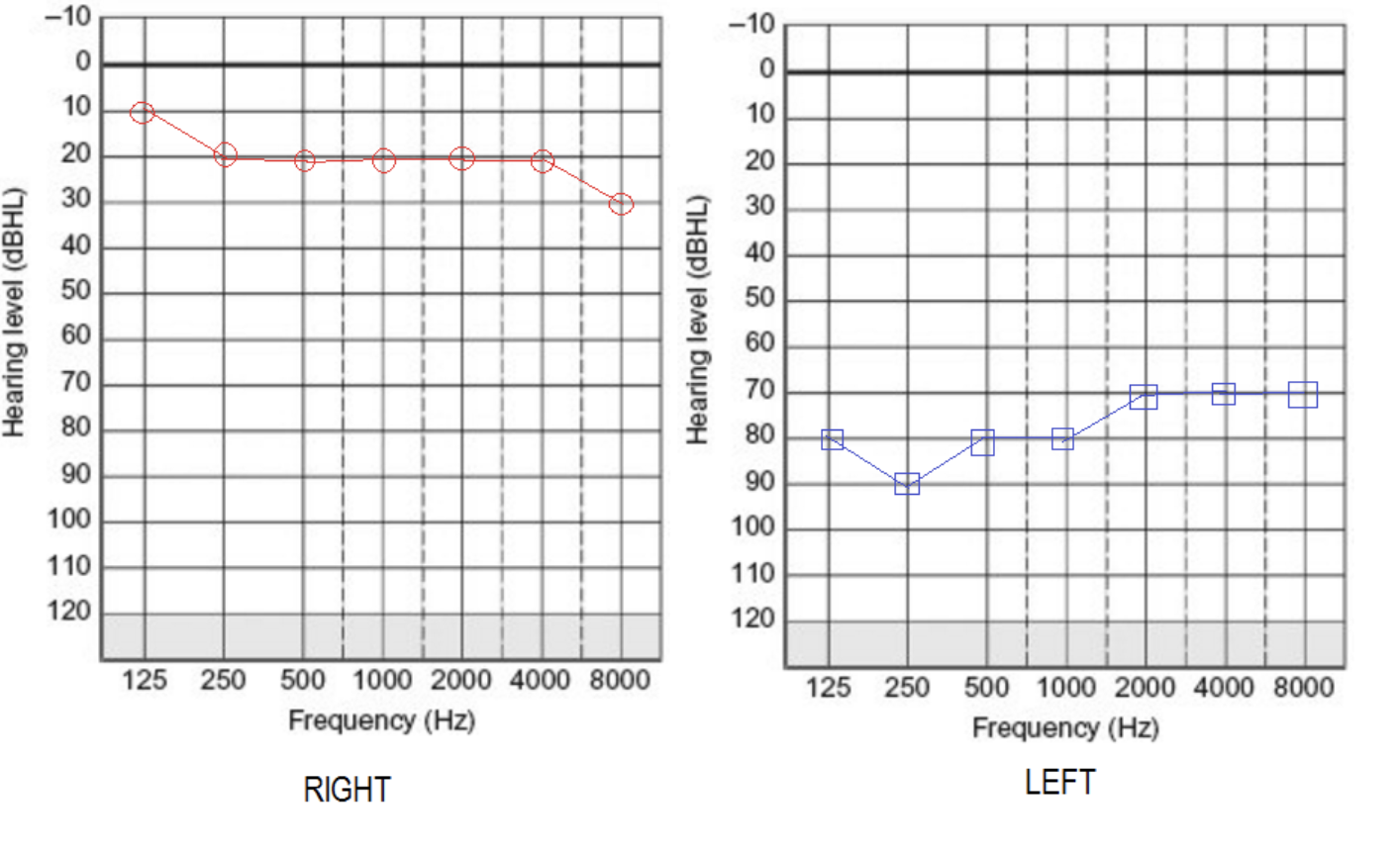 This audiogram represents possible high frequent hearing loss that may be seen in a migraine variant syndrome. It is episodic and hearing should resume to normal after the migraine resolves.

How is Meniere’s Disease Treated?

There is currently no cure for MD, but long term management includes the following goals:

Your long term management may also include such lifestyle modifications as the avoidance of dietary triggers (i.e. caffeine, alcohol, nicotine, MSG) and a salt restricted diet.  Lowered salt intake has been shown to reduce sodium fluctuations in the bloodstream, reducing the risk of developing endolymphatic hydrops.  If your symptoms are not managed through lifestyle changes alone, your provider may recommend pharmacologic therapy. The first line of pharmacologic therapy will typically begin with a diuretic medication such as Hydrochlorothiazide, Dyazide, or Acetazolamide to reduce the fluid pressure in the inner ear. Betahistine is another medication widely used in Europe and the UK which is believed to act on histamine receptors in the central nervous system.

An understanding of MD will help you to play an active role in the management of your condition, and we encourage you to contact our office in the case of an acute attack.

The following paper details the link between Meniere's disease and migraine

Migraine and Meniere's: Is there a link?